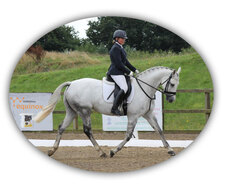 We were originally introduced to Equinox Original horse supplement by our vet, who thought that our horse Lilly would benefit from the gut support, appetite stimulant & immunity boost.
Lilly had experienced a very stressful time following a tooth extraction, which had led to infection.   The continued discomfort and veterinary medication, over many months, had taken its toll. She had lost weight, had barely any appetite and seemed constantly anxious / stressed.   After adding the Equinox Original, she began tucking into her bucket feed with new enthusiasm!   We also noticed in just a few days, that Lilly became calmer and more settled.  Thankfully, she very quickly regained the weight she had lost and was soon back to her former beautiful self!

We were so impressed by the settled outlook Lilly now displayed, that we started giving it to our other competition horses, who also very quickly became calmer and more relaxed.

Over the following weeks we noticed the general condition of all our horses improved and we were able to cut down on the bucket feed we were giving them.  We also started phasing out the other brands of supplements they had been having as Equinox Original covered so many of their supplementary needs.  We noticed no negative difference from stopping all the other supplements and their performance & attitude to ridden work continued to improve.  Our trainer noticed the change in their outlook, from highly strung horses who could be spooky, nappy and difficult, to much more amenable, focused and willing to train.

Our farrier also commented on the noticeable improvement in their hooves & frogs.  We told him about Equinox and he asked us to trial the specific Equinox Hooves supplement for 6 months.   We again used Lilly for the trial as she constantly lost shoes, even though she had been fed his recommended hoof supplement for several years.   Having carried out this trial and noticed for himself the increased growth and improved condition in her hoof wall plus the undeniable fact that Lilly had stopped losing shoes, he went on to change his recommendation of hoof supplement to his other clients, to Equinox Hooves.

Following such positive improvements with our own horses and combined with the huge financial benefit of reduced hard feed and needing no other supplements, we went back to our vet to ask him for more details, regarding the Equinox horse supplement range.

He told us that Equinox supplements had been designed by vets and scientists working together to create high quality & supremely effective supplements to improve equine condition, especially concentrating on improved digestive health.

We were so impressed that we contacted the European manufactures and were able to negotiate to become the UK's sole distributor of Equinox supplements.

In the early years, the business grew organically by word of mouth and on Facebook, as our friends and contacts had been following the story of Lilly.  Many of them were keen to try Equinox for themselves and their success stories were overwhelming.
And it didn't end with horses...